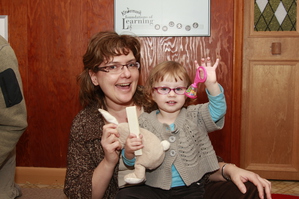 This year Sing Music Studio ran a draw with an amazing prize for the families that were registered in the Fall 2011 Kindermusik Semester to participate in. And the prize was… FREE TUITION! This is the first time Sing Music Studio has offered a chance to win free tuition. After a few years of working with dedicated clients and wonderful families becoming such an integral part of our Kindermusik family, it just seemed like the right time to give a little more back – because these dedicated families deserve a little break once in a while!

So, congratulations to Jana and Irina for winning the free tuition prize! Jana and Irina have been coming to Kindermusik at Sing Music Studio since 2010 beginning with our toddler program,  Our Time and also participating in most of the Sing & Play Dates. This fall, Irina graduated up to Imagine That for preschoolers. In the time they have been coming to Sing Music Studio I have already seen so much growth and change in Irina. She was barely speaking when she began Our Time, was a little quiet and shy and now Irina has so much to say and share, it’s hard to believe she’s the same girl! Irina’s beginning to develop a sweet little singing voice and now that’s she’s experienced the community togetherness and social skill development in the toddler class, she’s having no trouble adjusting to the new routines developing with her peers in the “big kid” class without mommy! I’m really looking forward to seeing the changes to come in Irina’s development and musical skill – but I hope it doesn’t happen too fast – you’re only young once!

Congratulations again Jana and Irina! You deserve it!

Tweet
Share
Pin
My daughter really enjoys Mandi's approach to both voice and piano. Mandi has been sensitive to my daughter's needs so that she does not become frustrated with too much work. My daughter has really improved in her piano playing and enjoys practicing more than when she began. I appreciate the individualized approach and the focus on repetition as well as the child's interests.